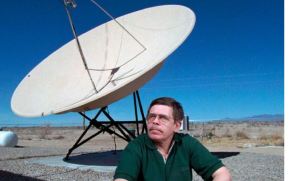 Art Bell, taken at his home studio in Pahrump, Nevada, 1997.

It was back in 1988, while working for a west-coast powerhouse radio station, that I received a phone call around 10pm from the Program Director, “Hey, Jim!  Art just called and he is stranded in Pahrump and can’t come do his show.  You’re the only one he will allow to fill in, would you please?”     Art Bell was on-air from midnight to 5am, Monday through Friday with a fledgling all-night talk show that would soon become one of America’s most listened to phenomena.   I had only spoken to Art as he arrived prior to beginning his show whenever I was filling in 6pm to midnight when I first started ‘filling in’ at KDawn.   I was somewhat surprised that he would make such a request, but I did so and for a year, as his show was taking off, adding stations as “West Coast AM”, I filled in for Art numerous times.  We never were close at all.     Some years after leaving KDWN, my wife and I were having dinner at Marie Callender’s Restaurant in Vegas, when Art and his wife, Ramona, were seated near us.  As we were leaving, I stopped to say hello (I had taught Ramona when she was a student and I an instructor at Nevada Broadcasting School).  Ramona greeted me warmly, but Art didn’t say a word!  That didn’t surprise me since I knew him to be a rather strange fellow.   He was brilliant, but bent.  His claim to fame was due to his ‘totally-off-the-chart’ delving into the dark side with focus on the bizzare.  Art passed away, supposedly from a Drug Overdose, at his home in Pahrump, Nevada about two years ago at the age of 72.  His life would make a very interesting novel.  Filled with mystery and strange occurrences.  He has been featured on many of the television programs that deal with UFO’s and Aliens.  Interesting that we both smoked and ended up with COPD.   Even with all his idiosyncrasy, I liked Art.  He created drama with just his voice, and that made him unique.  I wish we had taken time to talk about Jesus, and it is also my opinion that whatever Art and his fans talked about, well….it may not be so ‘farfetched’ at that, donchaknow.

And that’s what I get from My box of chocolates.      AMEN

This site uses Akismet to reduce spam. Learn how your comment data is processed.